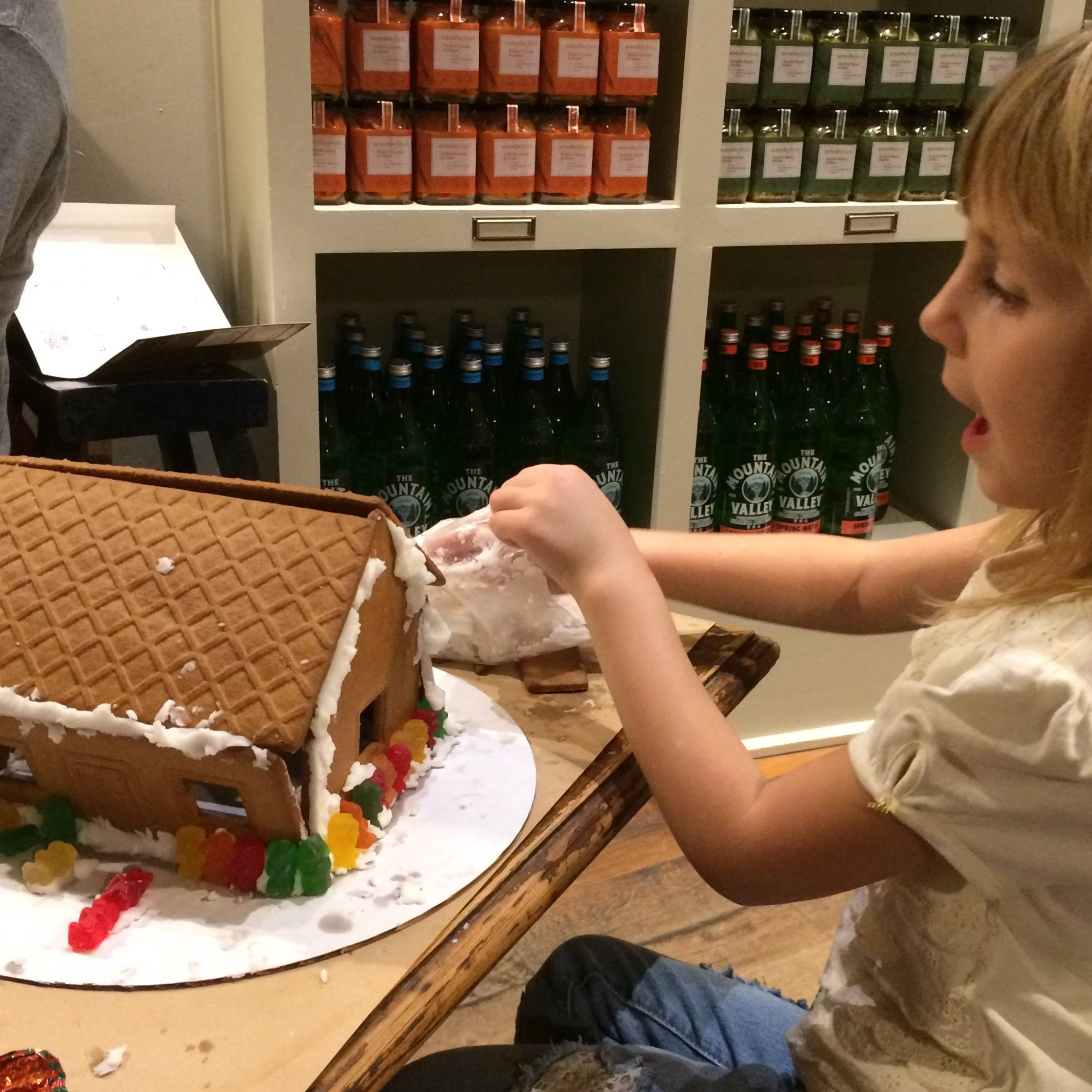 I said yes when I really wanted to say no.

I came up with excuses when it was time to go.

I was not excited about stepping outside of my comfort zone.

Not for myself, but for my daughter.

I sucked it up and went to the gingerbread house decorating event.

Craftsy things are not my thing. Seriously, not my gig. Never have been, probably never will be. I would rather write a research paper or clean a toilet over doing anything craft-ish. But my daughter really wanted to make a gingerbread house (and it’s the season!) so I sprayed on some positive power and took her to the gingerbread house making shindig. While I didn’t have any super savvy decorating ideas, I did I suggest she bring her toy reindeer to spruce the house up.

When we arrived, everybody was buzzing and the sweet smell of gritty white frosting filled the air. I went to the counter to get our kit. The excitement on my daughter’s face reinforced why I was there…that and the insane amount of candy that we could help ourselves to! Whooo! M&M’s, skittles, gum drops, marshmallows, chocolate squares and candy canes, oh my! We loaded up on goodies to work with and went to a table that friends had saved for us. All was good.

My little love and I were having a blast taste testing our candy decor and talking with other people making their houses and surprisingly, the gingerbread house actually started coming together! My daughter even made a little snowman! Go mom, go mom!

Crunching on our candy, we began to notice that the walls were starting to separate. All the extra frosting and sticky candy to reinforce the walls were not saving the house. The roof started caving and gingerbread was cracking in places. All attempts to salvage it were failing. Mental note, next year bring a glue gun! 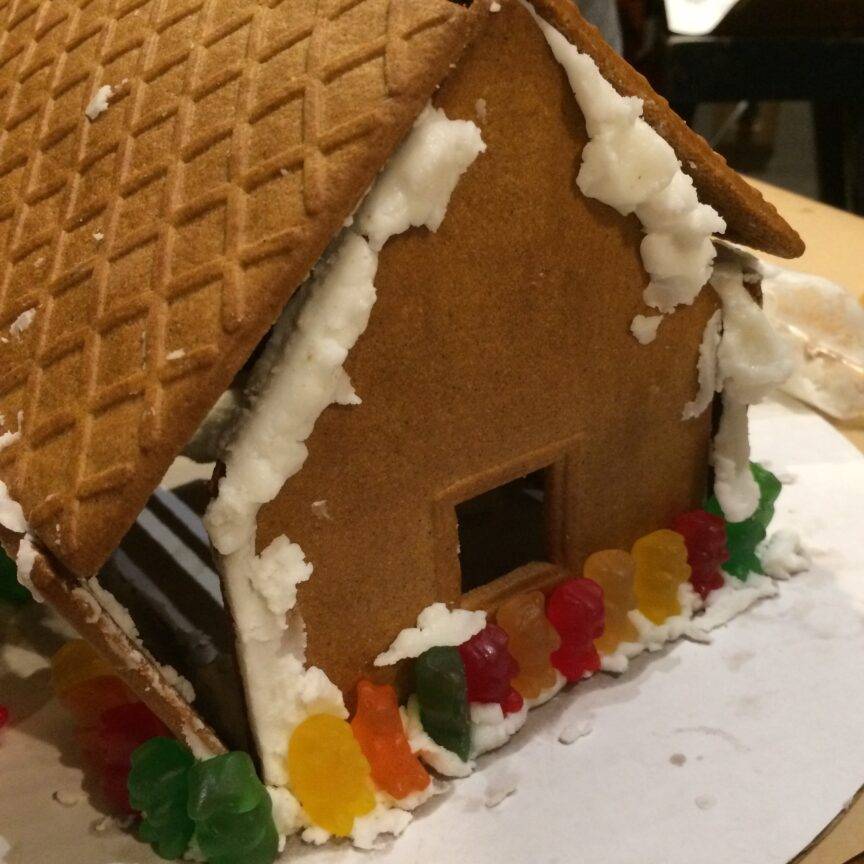 When the roof finally gave, and the walls began to crack, I said, let’s build an artsy avant garde house! Idea denied. She insisted the house had to be the way the kit photos showed. Then I said, “look honey, it’s a gingerbread barn for the reindeer!” As clever as I thought my spin was, she wasn’t having it. She really wanted me to save her house. As I tried, two of her friends came by. They saw the reindeer and asked to join in and play. Suddenly, my gingerbread barn was embraced as a great idea (you better believe I pitched it again…this time saying that reindeer can’t have a roof, they need it open to fly in and out…it worked!) Gingerbread crafting was done, I was ready to sit back and watch the kids play! Watching my little lady make her mess and get creative was nothing but pure bliss. 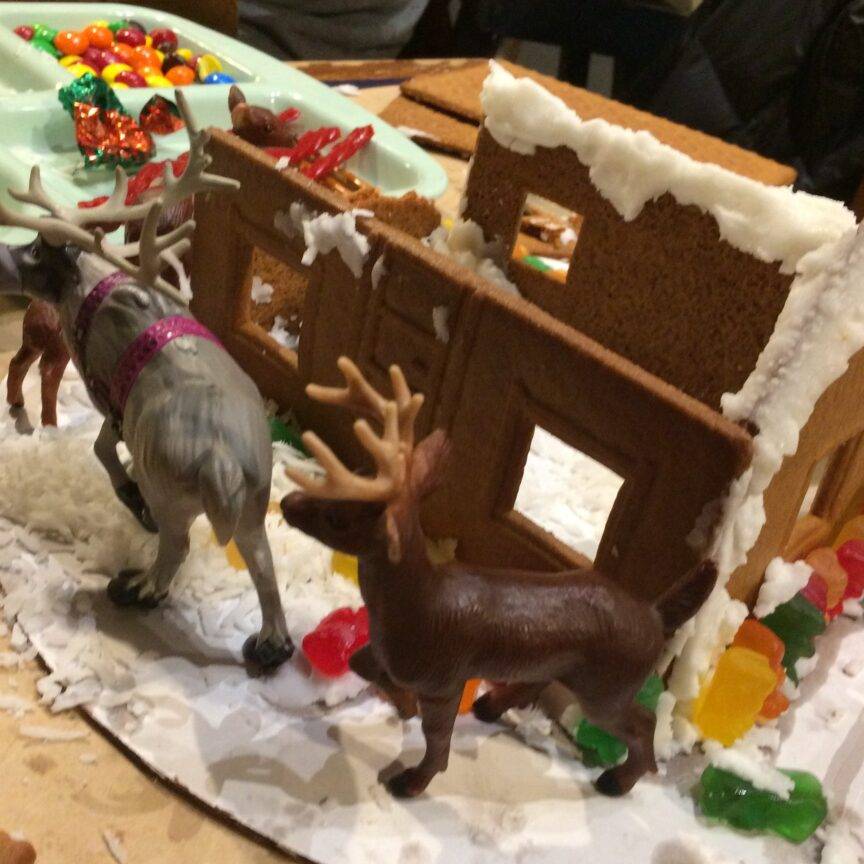 The candy became “deer food” and my daughter and her friends were focused on making this fantastic mess. It was far from a traditional gingerbread house making experience, but this modern take was totally working for me! 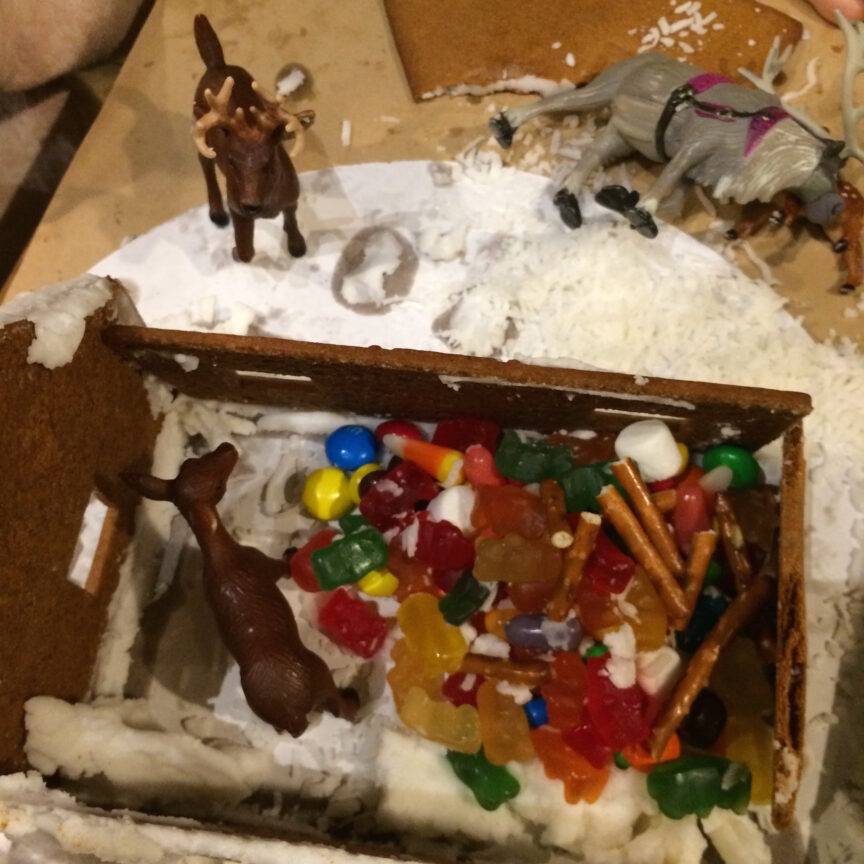 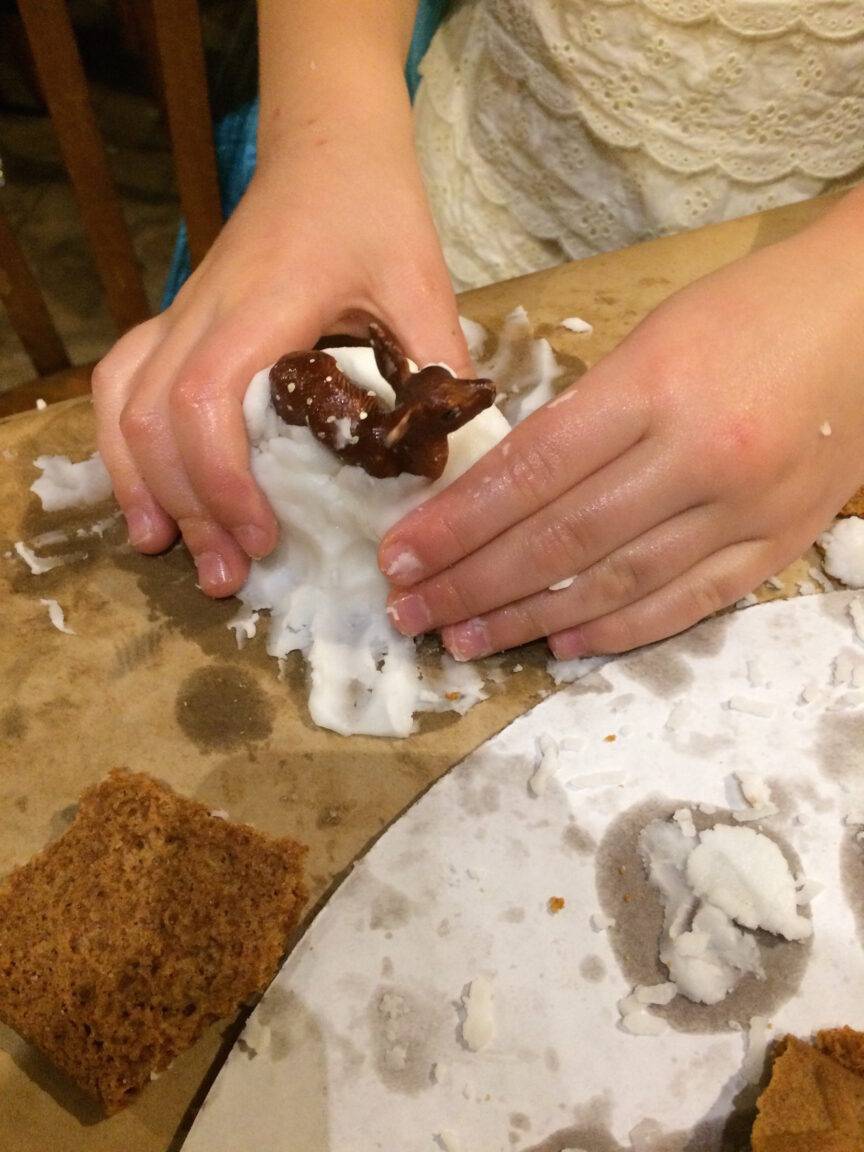 I was so stinking proud of myself for suggesting she bring those little reindeer toys and so relieved that my gingerbread house building fail worked out. I took a deep breath, gave myself a virtual pat on the back for getting out and doing this and decided to get myself a glass of wine. (Shocked that I didn’t get wine in the first place? I was too! Ha!)

Just as I was about to walk back to the table with my glass of “uh, huh, oh yeah, having a great time” wine, my daughter came over. She didn’t even have to speak, I knew what was coming.

She was suddenly cracked by her cracked craft.

Tears welled up in her eyes and her voice got louder and she began to complain that her gingerbread house didn’t look like everyone else’s (and in our case, not even close). As much as I could relate to her 5-year-old feelings and sudden change in disposition, I was not going let this night out go to waste. I reminded her that we tried to make the house stick, that this was our first year making one and that her and her friends had just spent a ton of time having a blast playing with the reindeer and candy. Reminding her that she left her friend and reindeer alone (distract, distract, distract), I got her to go back to the table. Thankfully, the comparisons left her mind and her and her friend continued to play with their magical mess. The power of being around people and having community is never something to take for granted. 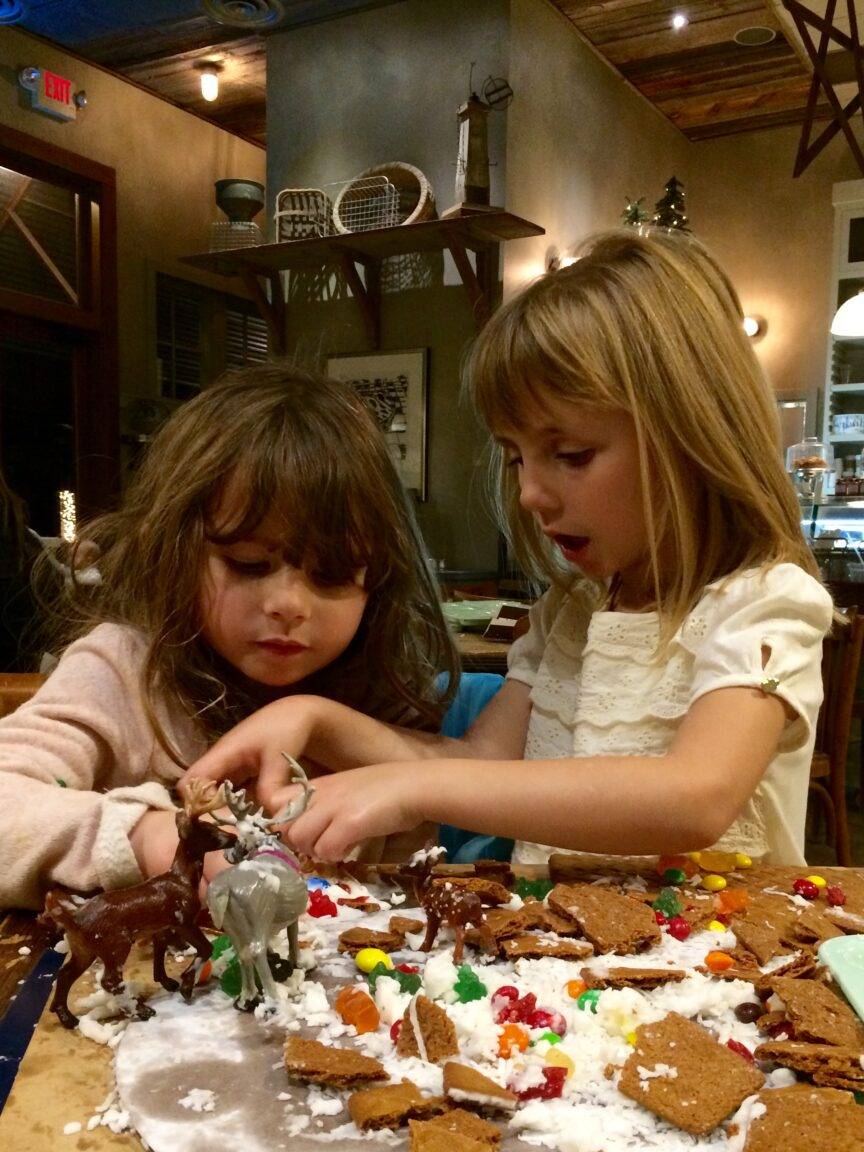 I’m glad I took photos and got proof that the house did stand at one point because this is how we ended! 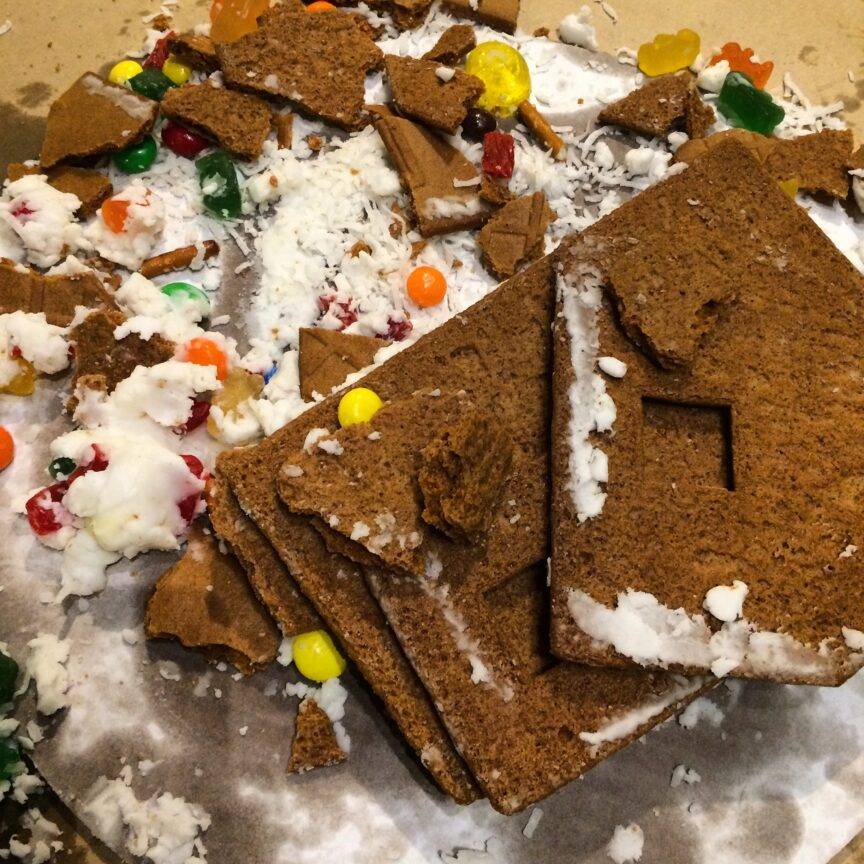 As I was partaking and observing in this gingerbread house making experience, I thought about my Dad. Just a year before he died, he was written up in the local newspaper for his hand-crafted gingerbread house (complete with lighting!). I couldn’t help but look at this mess and think about him.

I’m not going to be good at everything, especially crafting, but one thing I can always work on perfecting is being a good parent. I don’t believe in the “everybody wins” “everybody gets an award” approach. Our house, compared to the others sucked and we owned that. But the time we had overall was a winner!

As we were wrapping up and people were putting their houses out for display, my daughter and I talked about how much fun we had, laughed at how dirty her toys got (and how much fun they had!) and what a creative and unique experience it was. I then said “Repeat after me – avant garde!” I told her her creation was truly avant garde and asked if she wanted to put it with the others. I half expected her to say no, but this newfound vocabulary word changed her mind. She walked her beautiful mess over and put it on the table (and there were some eyes rolling appalled that we put it with the good efforts)! I don’t expect everyone to get it or even support it, but our disaster was an experience, and my little family values experiences, atypical ones preferably!

Here’s to being Avant Garde! 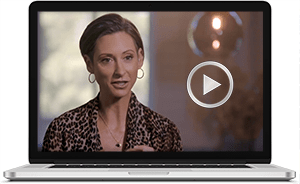 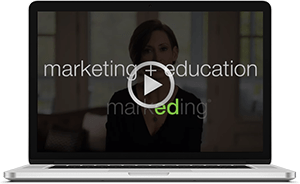 We use cookies to ensure that we give you the best experience on our website. Continued use of this site indicates that you accept this policy. Read more. Accept